I’ve been studying the Federal Trade Commission Complaint against Horizon Corporation, which was responsible for developing New Tucson, key words to search in the 500-page document is “improvement.” It appears from the Complaint that Horizon deceived buyers into thinking there would be improvements on their lots. Pima County no longer approves a subdivision without utilities and roads.

14. In the further course and conduct of the aforesaid business respondent has made and is making various statements and representations to members of the public, by means of advertisements in various publications of general circulation, promotional materials TV and radio broadcasts, telephone calls and sales presentations involving oral statements, written statements movies and slides concerning the past, present, and future development of respondent’s properties, and inclusiveness of the purchase price of a lot. The aforesaid statements and representations use words and terms such as communities, “community developer,” “master plan,” “land use plan,” “new cities” and other words or terms of similar import.
15. By and through the statements and representations alleged in Paragraph 14 herein, respondent has represented and is representing, directly or by implication, that substantially all lots are now, or by approximately the end of the purchaser’s scheduled payments will be, located within a self-contained and fully developed community, and that the price of the aforesaid lots is all-inclusive.

You are acting in the shoes of Horizon Corporation. The FTC said:

3. Propose at any such meeting called pursuant to subparagraph (1), the following amendments in the articles of incorporation and bylaws of each such association as may be needed to accomplish the following:
(a) A limitation on the holding of positions on the Board of Directors, any Committee or as an officer of said association by anyone who, while serving in that position, is or has been a director officer, employee, agent or representative of respondent or any of its subsidiaries or divisions to less than a majority of Board members (continued below)

It does not seem fair to impose HOA fees on lots that will not be developed for many years (see FTC complaint):

(b) Elimination from such by-laws and articles any powers, such as to extend utility lines, which the association has not and is not likely to use because of adverse effects on its non-taxable status.
(c) Postponement of the annual charges and assessments by each undeveloped lot owner until such time as water, sewer and electric utilities are in place in the street in front of each lot, or until such time as the utilities have been contracted for and the date of installation is certain.

Based on the FTC Complaint, it appears that the judge made an error in deciding against the County in New Tucson Unit No. 8 Homeowners Association v Pima County: C20041194.

You should allow me to quiet title against Mr. Sullivan [a sucker who bought $400,000 worth of Special Assessments on 8 of my lots] as I told you in October I planned to do. 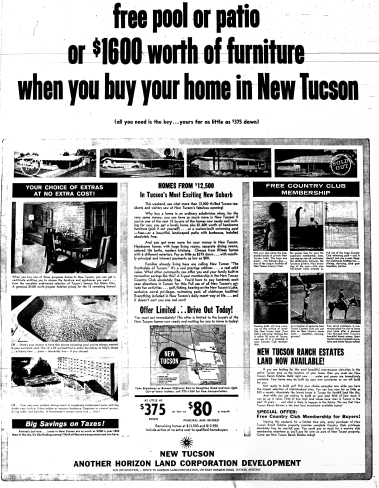 NONE of the minority vacant lot owners is happy with the HOA. The people with houses in Sycamore Vista were unhappy living next to vacant lots. (Homes in the lots increases HOA dues.)

I urge you to reconsider your actions and to immediately call a meeting of all members of the HOA to determine our future — such as extinguishing all the expired liens and a discussion on further assessments and dues for vacant lot owners.