Why would National Bank of Arizona lend these guys $35-million?!

Here’s the 2nd Amended Complaint by Derry Dean Sparlin, Sr., they dropped the Barnitt’s, who were victims too. (Morris Family Trust lost $1-million too.) Added Hadrianus Terra, LLC, which is also a defendant in my lawsuit another mutual defendant is Tucson Acquisition & Development Corporation, both affiliated with Michael N. Figueroa and Jeffery S. Utsch, who were the prior majority lot owners, Utsch was head of the HOA too.

The inept management of the Corona (New Tucson/Sycamore Vista) Project, which led to National Bank of Arizona losing $35-million, pages 53-56

Western Recovery Services (managed by prior majority lot owners) had no cash and was maybe using liens on our lots as assets: pages 53ff

Sparlin has an interest in Hadrianus Terra, I’d like to have him join our lawsuit, his lawyer has written a serious indictment against the prior majority lot owners — securities fraud! Like to also see the lot owners who lost their lots to Hadrianus and Tucson Acquisition because of the bogus Assignments (they intimidated the prior lot owners) join our lawsuit. The prior lot owner of Russo’s associate Southern Arizona Land Trust lost their lots due to despair.

The Assignments of Special Assessments, which are the focus of my lawsuit are securities. From reading this Amended Complaint, it appears that Western Recovery Services had no real cash assets and from looking at the HOA budgets (See Unit 5 for 2006, page 36) it looks like WRS never paid the HOA any money for the Assignments. The budgets consider the WRS “Purchase Agreements” as liabilities — whatever that means? These budgets are very confusing to me. The HOA gave? the assessments to WRS and then WRS sold them to friends and investors, not sure if any of that money went to the HOA.

(Copied from Arizona Corporation Commission, unfortunately, they’re not in order, click right or left side of the page in full-screen to advance or go back.)

EDIT: This explains how they got the loan, they got Carl F. Pepper to apply for it. Pepper is well-known builder and real estate investor. He and Utsch are still friends and business partners. Not sure of Pepper lost any money, I think they appointed him head of Sky Island, which was the vacant lot holding company. Also involved in the foreclosure was CORONA ACRES L.L.C. and PALATINE PROPERTIES FUND L.L.C. both Figueora and Utsch entities

In 2005, the development group Sky Island Properties Inc., led by Carl Pepper, took out a $32 million loan from National Bank of Arizona to buy land and make improvements there. Last November, the bank took the developers to court for defaulting on the loan and had the land placed under another developer’s supervision, court documents said. Read more.

The $22-million and $9-million lot flip was between Title Security 862 and Sky Island. 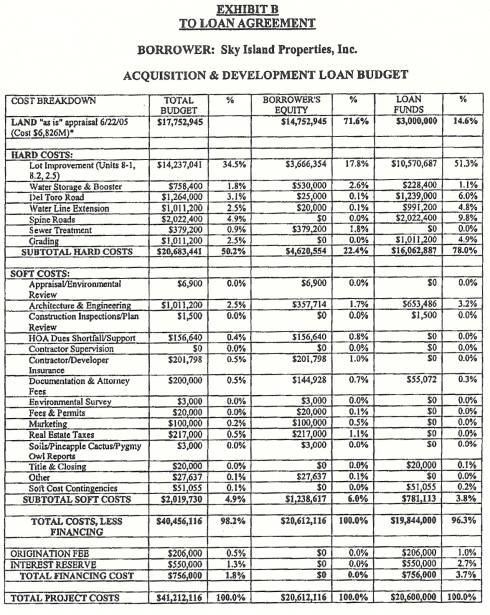 2 Responses to Why would National Bank of Arizona lend these guys $35-million?!